Much as I think that the what-if's discussions get a little redundant I really think that overall the sith/jedi conflict would have been more compelling throughout the prequels if Count Dooku had been in since Phantom Menace, killed Qui Gon and then continued as he did int he following movies.
Much as I like Darth Maul I think we can all admit that Count Dooku is a much better character.

Plus when AOTC started and we read the crawl we all wouldn't be like "wait, who tf is Count Dooku?" 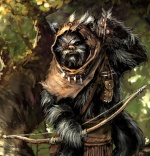